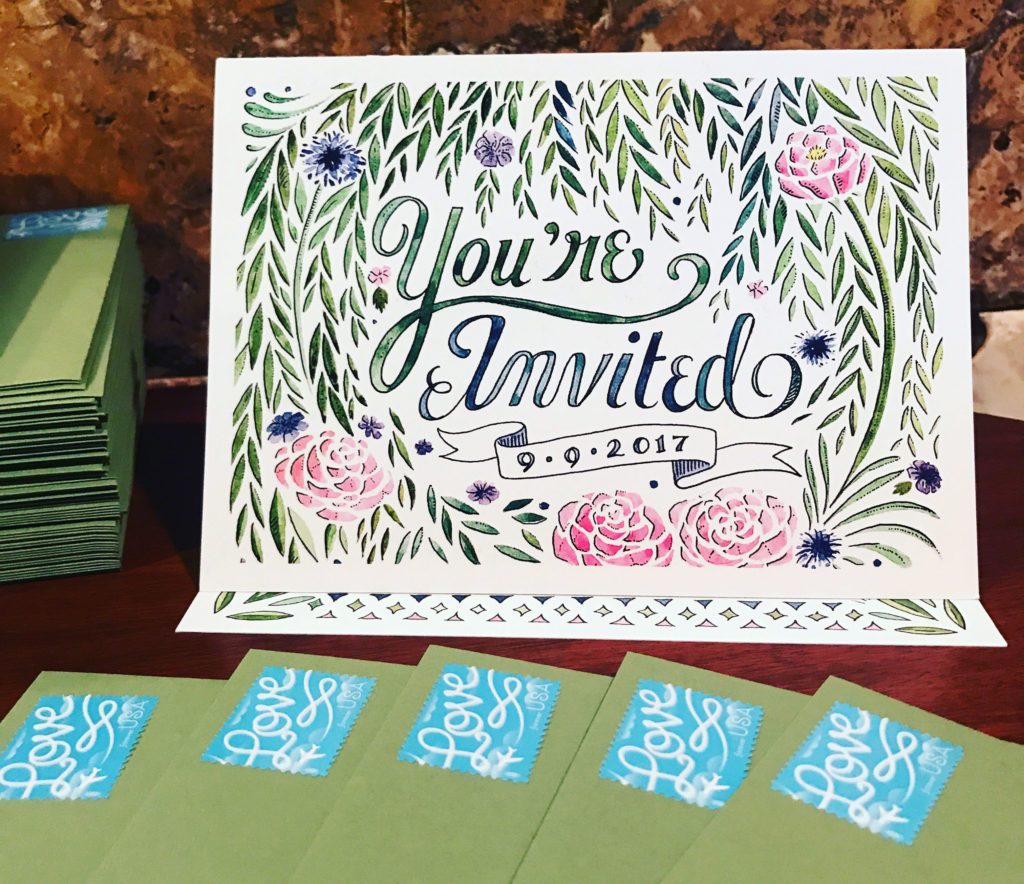 Over the past three weeks I’ve been sharing the journey of how my wedding invitations came to be. Today I’m sharing the finished pieces, as well as the entire wedding suite and photos of the big day! I was so excited when our wedding invitations arrived! I made Steven open them so I could video the reveal. Perhaps it was a little over the top, but these little things really excite me! As the video reveals I’m not sure Steven was as excited.

Once the invitations were designed we had all the necessary elements to begin creating the entire event package. The illustrations were already complete and I had purchased a couple of fonts that I knew would work well with my hand lettering. My intern, Hannah, was able to work through designing the program, table numbers, and place cards. She repurposed everything I created in new ways to bring together the entire package.

When you have the fundamental elements needed to make up your visual branding package it’s rewarding to watch your brand package come together with ease.

Pictured below are a few of the items we created using my original illustrations, hand lettering, and fonts. There’s no question that these all belong together. Likewise, you want your customers to easily recognize your brand—whether digital or in print. Designing our wedding invitations was a fun way to represent our unity and who we are as a couple. Designing your branding package should faithfully represent your business—defining the business personality and emulating your unique mission. Sometimes it’s abstract and subliminal but it’s still there—pictures are worth a thousand words (or more). Let’s make sure your images are sending the right message! Contact me here to get started. 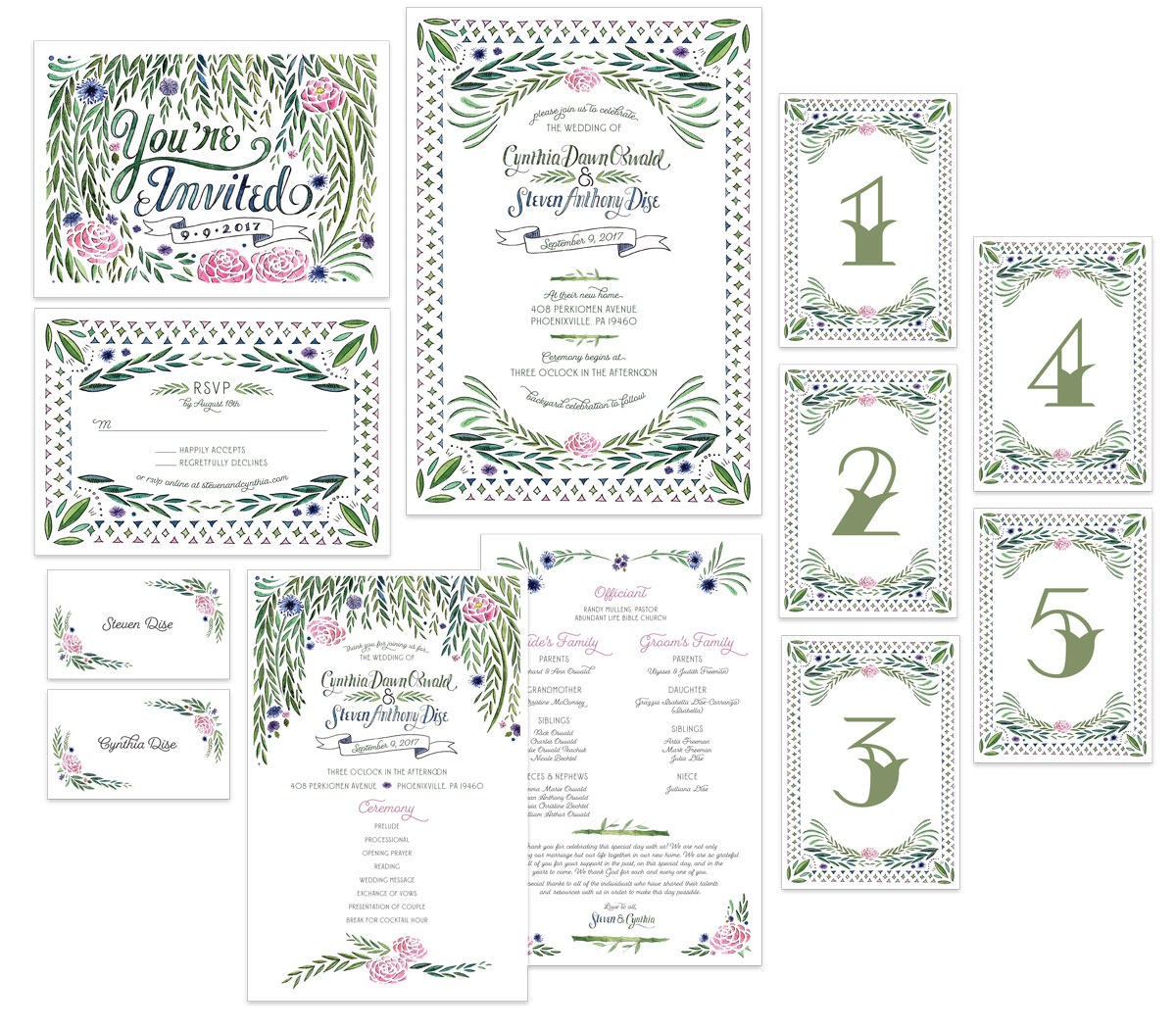 In 2011, in the height of our recent depression, I found myself in the position to buy a house. I knew I wanted to live in a small town—somewhere within walking distance to restaurants, coffee shops and parks. After a long day of disappointing house hunting my realtor suggested we look at one more home on the “north side” of Phoenixville. Immediately I was on edge by the negative connotation that the “north side” implied. However, I was interested in seeing the full gamut of homes so I agreed to see it. I had a particular set of expectations for my home, something with high ceilings and preferably a lot of space that was somehow affordable for a single woman in her twenties. This home was half of a double, brick and built in 1900. As soon as I stepped inside I was flooded with positive thoughts about the space but when I climbed up to the third floor to find two unfinished rooms with workspaces and bookshelves already built in I knew this was where I belonged.

During the process of putting in my offer I received a lot of negative feedback about the area. I drove around the neighborhood at all times of the day to see how I felt. I spoke with the neighbors and walked through the town. I found the more I came to visit the more I fell in love. At any moment I could have allowed the negative comments to affect my decision to move here but instead I followed my heart. In the process I’ve met so many interesting individuals. I feel that Phoenixville, especially the north side, is very eclectic. I’m more inspired as an artist than I’ve ever been in my life. I feel strongly that I owe it to this house, more specifically the north side, and the people I’ve met since living here. When you judge someone or something prematurely you deprive yourself of the opportunity to love that person or thing.

I’ve grown to appreciate my neighborhood for all of its idiosyncrasies—beautiful and quirky. I’m also proud to be a resident of the “north side”—despite what some people may feel. It was through this realization that I was inspired to give back to the community. I contacted the Beautification Advisory Commission for The Borough of Phoenixville to see how I might be able to get involved artistically. I never would have guessed they would ask me to participate in a mural project that was located on the north side, just a quarter mile from my home. The mural, an ornate depiction of a phoenix, can be found on Route 113 as you are heading north out of town.

A big thank you to Lou Beccaria, the head of the Beautification Advisory Commission and a prominent member of the Phoenixville community, for allowing me to meet with the committee and discuss my ideas; Jeanne McNamara for all of her work to secure the location for the mural, for gathering volunteers from Villa Maria Academy, and spending the time to paint the mural alongside me; and finally Kimberton Whole Foods for purchasing the supplies to make this project possible. 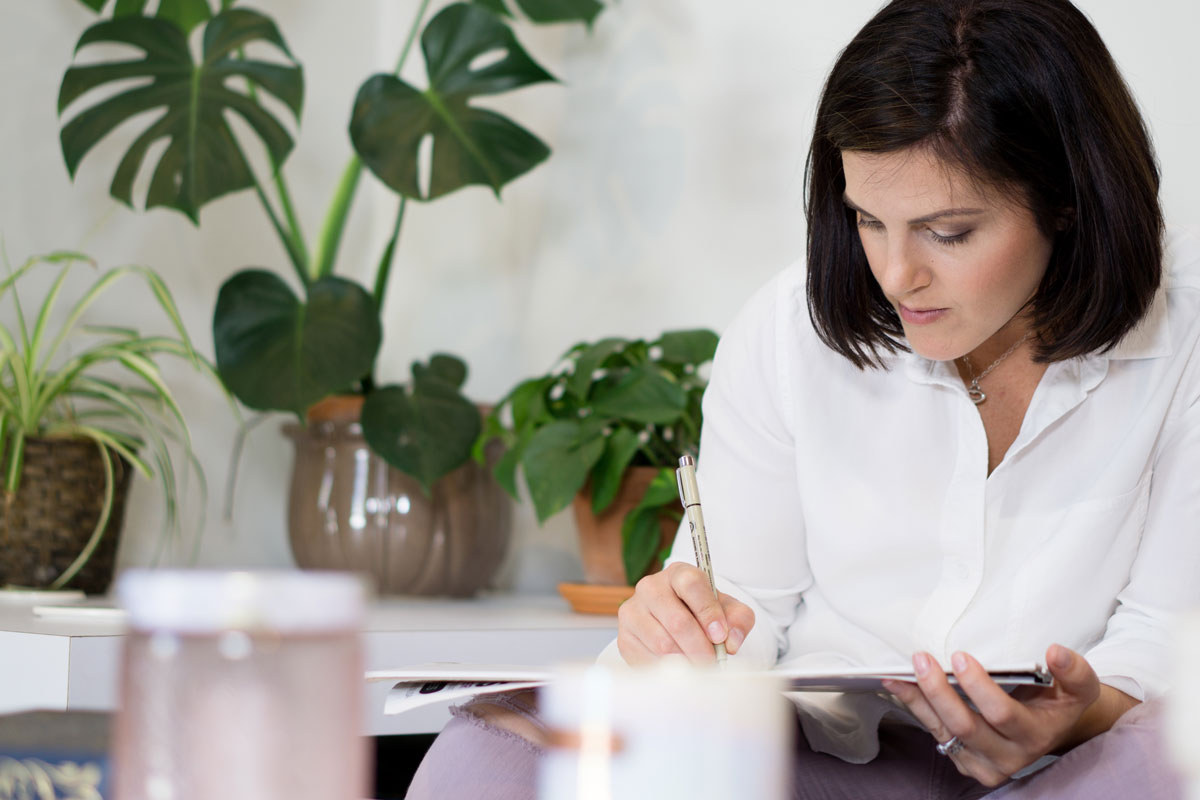 In addition to creating surface design and fine art, I own and manage a boutique branding agency just outside of Phoenixville, Pennsylvania. When I’m not working you can find me chasing my little ones or dogs around our small home, enjoying a fire with my husband, reading, or riding my bike on the river trail near our home.